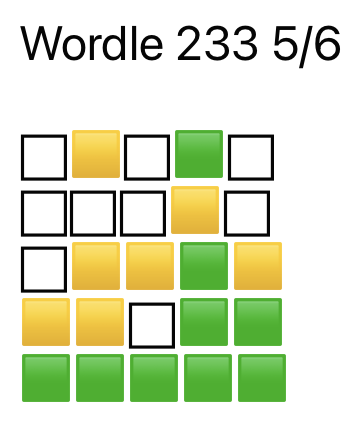 For all the talk of the return to form, this one proved me wrong pretty quick. My hopes were raised, just to be dashed in futility mere minutes later. I tried to sit there and just think. I typed in place holder letters as I tried to rearrange the letters I did know. Trying to conjure the Wordle from my blank mind.

At some point, I became convinced there had to be a duplicate letter in the word. At the time I didn’t know how Wordle handled this. Now I know that if a letter is guessed twice, each instance is treated separately. So if there are two instances the letters are green or yellow. If there is only one instance of that letter, the other will be gray.

I wish I knew that earlier.

The solution left me feeling weary and enfeebled.